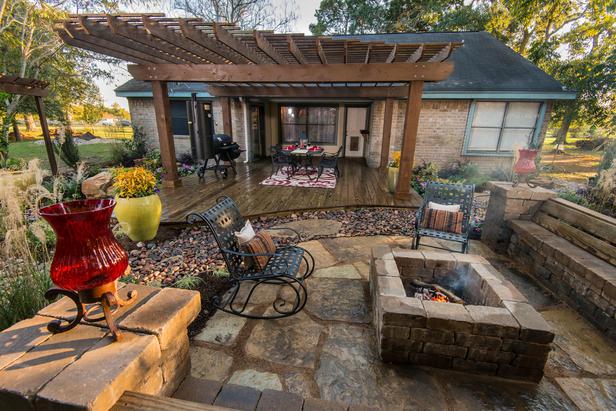 HDG Landscape Design was fortunate enough to be selected as the first and only Texas designer for DIY Yardcrasher’s Houston episode.  The California crew and host soon realized things really are bigger in Texas after receiving lots of donated resources from generous local companies including Tomball’s beloved nursery, The Arbor Gate.  We were about to embark on the biggest Yardcrasher’s project in the history of the show, and we still only had the designated 1.5 days available to install.

Thankfully, the design process started for HDG Landscape Design in September 2013, but the design process was the quickest executed in HDG’s history to date. HDG was hired 24 hours before visiting the episode’s property, was notified just 2 hours in advance of the location of the property, was only allowed 30 minutes on the property while the crew was there to ensure no one interacted with the owners, and our team worked diligently in one of Houston’s famous rain events to measure the site and take photos as it would be the last time we saw the property before filming in just 2 months.

To make sure we would be ready for filming on time, HDG prepared a detailed plan, material inventory for purchasing, and site furniture selections in just 4 business days, and the team got to work finding local Houston vendors to support the project. Through this process a major but seemingly minor change was made to the design. The main patio designed with large set Oklahoma Flagstone was vetoed by the show’s producer and replaced with a raised wood deck. This decision was not agreed with by HDG due to the site’s slope, issues with Houston’s climate and floods, and wildlife issues for this particular site located in rural Tomball including mosquitoes and rodents.  For the reference of the reader, it is recommended that a project located any area with known drainage issues or potential flooding (such as areas in and around Houston) includes appropriate drainage solutions in their project’s budget. As an additional bonus for the home owners, HDG prepared 3-Dimensional graphic representations of their project to present to the owners on the day the project began in mid-November 2013. These graphics did not give the owners an instant look at what to expect in just 1.5 shorts days from the project’s beginning, but it gave the behind the scenes team including HDG and the producer an opportunity to plan where to shoot footage and final photos from in advance. The first day of filming went off with a slight hitch or two.  The “off camera” fun was had to fix the unknowns found on site, and a generous neighbor lent the owner his tractor to remove a particularly difficult tree stump. Even in November, it was hot and humid out in Houston, but the behind the scenes team worked hard from 7:00 am – 11:00 pm to make sure we stayed on schedule. HDG’s role on this day included project layout, directing the behind the scenes team, educating the host about the types of plant and hardscape materials selected and design intent behind the layout, construction, and small details in the design so it could be relayed to the audience when on camera, and most importantly reassuring the producer that we were staying on schedule with the largest project ever constructed on the show.  By the second day it was evident that our hard work at night after the show left made all the difference in keeping the project on schedule. All that was left included fun scenes to film including dressing up pottery with edible plants, laying out the dry river bed, and putting in final touches with site furnishings. By 3:00 pm on the second day of filming, the behind the scenes team and California crew was ready for final photos and filming.  With a short 24 hours of labor and over 20 team members, the seemingly impossibly large project was made possible. For Holly and Barrett, this project finished just in time to host friends and family for Thanksgiving festivities. By nightfall, the crew and team enjoyed the cool night around the fire pit fitting 12 people comfortably on the seat wall alone. The “Behind the Scenes” Team waited silently behind the camera during filming, and then quickly got back to work between takes.

Home owners Holly and Barrett reflecting on the whirlwind installation.